How I got rid of almost everything, remade my life and regained my soul. 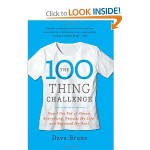 Dave Bruno was a fairly ordinary guy of 38 living a fairly comfortable life in Southern California with a  beautiful wife and family. Dave realized that, “I have an extraordinary amount of stuff in my house.”  Even though they were not particularly materialistic people who intentionally collected stuff – an abundance of things had just accumulated.  After a weekend of trying to clean the house and still having a lot of stuff he spontaneously created a challenge for himself – The 100 Thing Challenge.  This book describes Dave’s journey as he rationalises all of his goods down to 100 items.  There was no particular magic about choosing 100, it just seemed like a good number.  In fact there are a few anomalies in Dave’s view of what counts as an item. For example books is counted as one item, underwear is counted as one item, was each t-shirt is counted individually.

But that is nit picking  – the fact is Dave designed his own set of rules and stuck to them.

The interesting idea that Dave explores is how assets become liabilities.
That mountain climbing equipment that fitted into a dream of regular mountain climbing now becomes a nagging guilt / failure trigger every time he sees it.

He describes the challenge of dealing with gifts, particularly from his mother who had built her relationship around the giving of consumer items to Dave.

He talks about retaining and ultimately releasing a collection of model trains [the tiny Z gauge kind].  This triggered memories of his childhood when his father also owned a lot of model trains and spoke regularly of making a model train track layout but never did it.  He rationalises that his desire to hold on to the model trains is to somehow fulfill that childhood dream.  Again more guilt triggers.  He describes letting go of the trains as “inspirational and cathartic.”

He got rid of the rock climbing gear.  “I had wished to be a rock climber.  But I’m not.”
He describes the joy:  “After purging my toy trains and rock climbing gear, it was so nice to be no longer be burdened by what had gone unrealised in my past.
I felt free to be the kind of guy who thinks model train layouts are cool but would never actually take time to build one.  I was no longer depressed by the knowledge that I own the track I haven’t put together and trains that weren’t running.  I felt free to be the kind of person who is impressed with rock climbers but would never actually find himself attached to a rope, gripping  a sliver of rock hundreds of feet in the air.  I was free to appreciate these former interests of mine rather than worry about not participating in them.”

“The 100 thing challenge proved a handy way to get rid of stuff that was never going to fix my past or make me someone that I was not.”

In late 2008, Dave whittled his personal possessions down to 96 things.
So Dave then had a new rule –  “I could get new things.  But I always had to remain under 100 things total.  And also if I replaced something, I had to get rid of the original item before I got a new one. “

Because Dave was not really in the mood to buy things (or at least he seriously considered every new purchase) he found that he and his wife no longer went to the mall as often.  He describes the experience of when they do go to the mall after an extended break of how he wasn’t missing the experience of buying stuff.
It seems to me that shopping has become a significant recreation in the Western world.  We spend a lot of our time in shops – this is a lazy default mechanism as to how to spend our time.

Perhaps the most startling affirmation of Dave’s experience comes from the chapter that he calls “my almost perfect Wednesday” .

It was a lovely day in Southern California and during the day Dave had a surf in the morning, work went well, no fires to put out, made some decent progress.  A delicious lunch of leftover teriyaki chicken.  And then his wife called with the news that they were unexpectedly able to have an evening without the children.  So they had a nice meal at a local Mexican restaurant, went for a walk on the beach, watched a movie and made love.

When Dave contemplated that day he used 20 of his personal possessions.
“It took only 20 of my own things to have won the best days of my life”; he then poses the question, what does it take to be happy?

This really resonated with me – some of my most memorable lifetime experiences have not involved much stuff – whether it be sporting memories, camping, learning or even a day in Berlin last year – where I went on a 20 Euro bike tour of the city.

Dave believes that the 100 thing challenge has taken him to a better place. He is no longer a slave to stuff.

I found this simple book to be quite inspiring and whilst I was already on board this concept ,Dave really pulls it together in a neat, understandable way.

I like the way that he has experimented with his life, set his own rules and basically used it as an opportunity to explore himself.
“The almost perfect Wednesday”  sums up the whole idea / situation / possibility.

For more information see Dave’s blog www.guynameddave.com
(Other people have come on board with this including Leo of zenhabits.net who has upped the ante and taken it to a 50 things challenge)