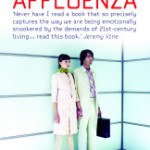 “The affluenza virus is a set of values which increase our vulnerability to emotional distress.  It is placing a high value on acquiring money and possessions, looking good in the eyes of others and wanting to be famous.  Infection with the affluenza virus increases your susceptibility to the commonest emotional distresses; depression, anxiety, substance abuse and personality disorder.”

Got your attention ?
That’s how Oliver James prefaces this book which was started in September 2003 and first published in 2007.

Oliver poses the question, why when by many measures the Western world members are better off why are we feeling more anxious and depressed and basically less happy?

So James spent 12 months traveling and interviewing people in New Zealand, Australia, Singapore, Shanghai, Moscow, Copenhagen and New York.
James provides us with an illustration from his tour “Sam is a 35-year old New York stock broker who earns $30M US a year and will inherit about $1Billion when his father dies.  He lives alone in a 5 story apartment in Central Manhattan he used to be addicted to heroin, now it is sex with teenagers (19y.o. Russian super-models).  He is paranoid, pessimistic, lonely, riddled with affluenza and not a very nice person.
But contrast Chet, a Nigerian born immigrant taxi driver who gave me a lift the next day, earns a thousand times less, he is happily married, not a little paranoid despite frequently being attacked by his passengers, full of optimism and a very decent human being.
Believe me if you have to hang out with these two, you would choose Chet every time.”

James interviewed about 240 people across the globe.

James looks at the happiness levels of the wealthy.  He quotes from two American Studies that indicate over 1/3 of a sample of super rich people [those with a net worth of US 100 million or more] were less happy than the national average.  A second study found no difference between happiness levels of lottery winners and comparison samples of people with average incomes.

James does not provide a favorable view of Australia.

“Two-thirds of Aussies now say that they cannot afford to buy everything they really need. Amazingly , nearly half of top earners are confusing wants with needs in this way.”

His view is that Australians are most heavily influenced by America.  The author finds similar cases of affluenza in New Zealand, Singapore and Russia.

The Danish way
The standout exception is Denmark, which is reflected in lower rates of emotional distress than in English-speaking Nations.”

When happiness or life satisfaction is rated Denmark consistently comes out as one of the best countries in the world.  Indeed it is one of the very few developed nations in which these ratings have increased since 1950, rather than remain the same or dropping.  One observer put this down to the “very strong, real life gender equality.”  “Men simply cannot go all out for materialistic goals because you have to pick up the children, get back and make sure the cooking and washing up are done.”

Because they have a top marginal income tax rate of 65% [72% for extremely high incomes] and a VAT of 25% the tax system actually discourages people from chasing wealth.

Chinese Culture
The author makes some interesting points about the Chinese culture which permits a great deal of bad to reside alongside the good.
With regard to the self, failure is as readily acknowledged as success.  When the Chinese succeed they are much less likely than the Americans to beat their own drum by attributing it to their cleverness or diligence, implying instead that credit should go to their teachers, parents and support groups or even significantly down to luck

The vaccines – how to cure Affluenza

Replace virus motives [with intrinsic ones].

The author suggests that you :

Be beautiful [not attractive]

“Many women are prone to an obsessive concern with their weight, a love of cosmetics, elaborate hairdressing, socially valued, expensive clothes, and they are willing to countenance cosmetic surgery.
By contrast women who seek beauty are largely immune to these ways for corporations to make money out of them.  They have developed their own notion of what constitutes a pleasing external prescence and then measure against that, doing it for their own pleasure, not that of others.”
Consume what you need [not what advertisers want you to think]
In this chapter the author considered material goods  – in particular housing.  Interestingly from Australia he described property as a national obsession.  The author noted that “Australians now work the longest hours in the developed world, even more than the Americans.”

Vaccines :
1. Keep it real when it comes to the size of your mortgage
2. Back to basics; be grateful for what you have got

Educate your children [do not brainwash them]
This chapter was really concerning.  A 2003 British study looked at the levels of anxiety and depression in two very large [5,000 plus] representative samples of 15 year olds, 1 in 1987 and the other in 1999.  Amongst the bottom social class, girls rates of anxiety and depression rose only little but in the top class, the rise was from 24% in 1987 to a startling 38% in 1999, more than 1/3 of the most privileged and successful.  Interestingly, there was no significant increase in the problem amongst boys, but for the girls, rates of the kind of stress that can acquire hospitalization rose three fold [from 6 to 18%].
This same period (1987 to 1999) was one in which girls began to outperform boys in almost every academic subject at every educational stage.  This greater success of the girls precisely mirrors their increased emotional distress.
Vaccines
1.  If you have a daughter, beware that she would be much more vulnerable to prize hunting
exam fever than a son will
2.  To what extent were you the victim of prize hunting exam fever youself ?
3.  Discourage your children from believing that the purpose of education is to launch a career.
Enjoying motherhood [not desperate housewifery / househusbandy]
Vaccines
1.  If you possibly can divide the care of small children between yourself and your partner
2.  Try to find a nanny rather than using a kindergarten when choosing substitute care
3.  Enjoy being a mother / father
4.  Do not deceive yourself about the reasons you are returning to work
Be authentic [not sincere]

The author makes some interesting points about relationships “Studies of American patterns of life between 1974 and 1992 found a decrease in visits to neighbors and to parents, and of an increase in visits to friends and of the number of friends that people said they have.
However these friendships would seem to lack the intimacy of family relationships.  Close intimates amongst these friendships were few.

In Asian nations and amongst mainland Europeans there is a tendency to have fewer friends but greater intimacy with them.  The development of American patterns in Australia would be in accord with some of the stories in the book.

The author noted that in his travels, authenticity seem most evident – and least confused with sincerity – in New Zealand, Denmark and Russia.  New York and Sydney were bursting with sincerity but the very concept of authenticity seemed alien, except as a device for manipulation. It is harder to tell what was happening in Singapore and China.

The author notes :
“Recently, my wife and I were agonizing over whether to increase our mortgage in order to build an extension.  There were many other changes we wanted to make to the inside of the house, having done virtually nothing to it since moving in.  One day, pretty much out of the blue, the answer came to my wife; do nothing.  We had a house that was easily large enough for our needs.  Whilst some of it was seriously run down, the truth was that we should be bloody glad to have a house at all.  There were all sorts of things that we wanted to do, but we needed to do none of them.  ”

“An important personal implication of this book is that, whenever you are thinking of spending money, small amount or large, ask yourself  do I need this – or do I want it?”

The author identified some key vaccines for Affluenza.

Key vaccines for women
1.  Education  – concentrate on what actually interests you
2.  Career –  find work that satisfies you rather than merely enabling employers to get richer
3.  Motherhood  – hook up with other mothers of children the same age
4.  Beware of Gender role strain
5.  Not all men are bastards
6.  Force
7.  Appreciate beauty not appearance

1. Recognize how far you have been distanced from the passions that vitalized your early years and rediscover that vitality and playfulness

2.  Career –  think hard about that what you really enjoy.  Chances are that you have not done this, truly, for a very long time. It is quite possible that if you pursue what really interests you in your current line of work, you will  actually earn more, although that should not be your reason for making a change.
3. Fatherhood  – think about your role, consider taking a greater role
4. Beware of Gender role strain,rancour and divorce
5.  Friends and intimacy  – unless you are pretty unusual you probably have much less intimacy in your life than is good for you.  Bottom line  – most men do not have intimate friendships – people who they feel  capable of pouring their heart out to.
6. Big houses, boy’s toys and flash holidays. By far the greatest financial cross that you bear is most probably your home.  On a personal level, this is the single most powerful hold that selfish capitalism has over you.  A lot of the housing needs that you thought you had are exposed as mere wants.  Instead of moving up the ladder, you stay put; instead of enlarging your perfectly good residence, you get on with enjoying it.  As your spending decreases, you are finally at liberty to start paying off the mortgage.  The more you pay off, the greater your freedom to put intrinsic ahead of money, at work and at play.

The top two-thirds of earners do not realize how lucky they are to be so affluent and relatively healthy, they do not value what they have.

Perhaps government should be more focused on the happiness of their people not just their wealth.

Our Ideals
“As I tried to show you throughout this book, regardless of how much money or status is attained, for the virus infected there is nearly always a pervasive awareness of someone with more.”

My summary
I enjoyed this book. It is an important discussion – what really makes us happy ?
Have we been sucked into this conumerist lifestyle – I suspect that most of us have. Some of the differences between cultures / contries were interesting.
The personal epiphany of the author about deciding not to increase his mortgage to renovate their house – sums up the dilemma.
Deeply concerning was the chapter on teenagers and educational expectations – something has clearly gone wrong with the situation for young women (this intuitively fits some of my own observations).
I do not share all of the author’s opinions – I do not see why every privatisation for example is evil.
The key questions that arise are very personal ones :

Perhaps this book can help you get to the point where you give yourself permission to change your approach.

One thing that has been really useful to me has been to go on a low information diet. In this way you escape much advertising which is the pornography of Affluenza. Here is a link to my previous post on a Low Information Diet.

“It is a preoccupation with possessions, more than anything else that prevents us from living freely and nobly” – Henry David Thoreau

“The things you own end up owning you.” Tyler Durden in Fight

The Low Information Diet
Book Review : Vagabonding; An Uncommon Guide to the Art of Long-Term Travel