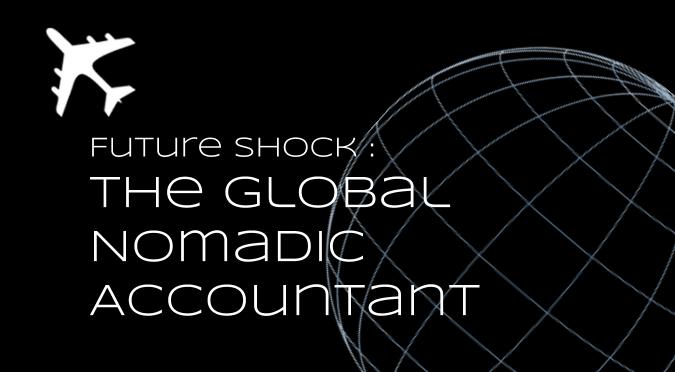 This an article of mine that was published in the Business Fitness Publication : Good, Bad & Ugly.

Back in the day – about 1990 – I was pretty cool; I had a car phone and a pager. A few years after that I had a dial-up modem and a Compuserve email account. I was uber-connected. One of the first kids on the block.

I’m a Chartered Accountant¹ but for the last 15 years or so I’ve called myself a Business Architect; I’m interested in the strategic “architecture” of the business and the business model – the interesting space where technology meets business models meets new workforces. I’m lucky enough to work with a range of interesting businesses to help them identify risks and opportunities not yet obvious. I help my clients think about what’s next: what does the medium-term hold?

I’ve said for quite a while that accounting is easy – you just need to get every transaction “right” every day.

For years I’ve been of the opinion that many accounting firms servicing the SME market have been generating a high proportion of their revenue from heroically fixing up accounting cock-ups; clients making the same (or similar) mistakes year after year. Accounting firms are charging high hourly rates for what is essentially problem-shooting bookkeeping, fixing “old” or “wrong” transactions.

I’m unashamedly a Xero fan. The mix of “rules-based automation”, daily transaction downloads and the power for multi-party delegated processing collaboration (including low cost – but capable – offshore processors) certainly facilitates “getting every transaction right every day”.

Let’s assume that every client got every transaction right, every day. What then?

Well then, “context” will matter. We all know that accounting profit is an opinion, but cash is a fact. I believe that the tools that will emerge with big data will enable us to better understand which transactions are opinion driven rather than fact driven:

Where does the accountant fit into this?

I want to share my vision of the global nomadic accountant. Of course, this won’t be the only type of accountant around, but I suspect that this group will be important.

Accounting bodies will compete to have them as a member.

Their study will be a mix of online and live. They will attend several offshore universities, travelling on low cost, long haul aircraft. Overseas, they will use “Student Airbnb” to find somewhere cool and cheap to live. Networking apps like Tinder will reveal new and interesting people nearby.

They will have two assets of note:

Their smartphone will be the gateway to their cloud assets – photos, music etc.

Their second (and more important asset) will be their online reputation. A great online reputation will enable them to transact at a low cost. They need to own very little but they will be masters of accessing whatever they need, whenever they need it, anywhere on the planet. Someone else will own it – they will merely access it.

And why should they want it?

They’ve probably seen at least one older person close to them made redundant with little control over their destiny and perhaps ‘not so good’ prospects.

They’re imagining a lifetime of interest payments on a “too large” house that probably will not have the crazy capital growth that we have seen in many of the past 50 years. The honour of paying big licks of stamp duty? No thanks. Weekends of lawn mowing and house maintenance? No thanks. Who wants to be tied down like that?

Who wants the commitment of the lease on a BMW 5 Series you can assemble, manage, optimise and pay for from the smart phone? On any one day, these PEOPLE could blend cycling, buses, trains, hourly hire car and Uber taxi. No registration and no car service to organise. A few weekends a year, they’ll get away in a rented 4WD or a Ferrari. And they’ll use this mindset seamlessly wherever they are, across the planet. Why own when you can simply access?

And back to their values – they may not look like “greenies” but they take a sustainability ethic for granted. Social entrepreneurship to them is at least as cool as capital entrepreneurship. Anyone can make money, but changing the world – now that’s cool.

Josh was a top achiever at his public high school and was socially popular. His ATAR was high enough for him to get into the accounting degree of his choice in his home town.

But Josh and two of his mates deferred university and crafted their own gap year. It was a hand-crafted “experiential” year. Leveraging their online reputations and networks, they combined periods of earning with periods of volunteering, switching seamlessly from capitalists to socialists, from personal indulgence to selflessness.

A highlight was their three weeks in Budapest. They’d hatched the basic plot a year before but had no idea when or where they might implement it. When they drifted on to Budapest from a week on the Croatian coast, they knew that was ground zero. Over a weekend and with capital of only $100, they launched their business. Fundamentally, it was a sophisticated pub crawl for Americans, British, Australian and New Zealand teenagers, plus “bolt-on” private parties.

Over that weekend they launched the website and social media campaigns, secured local “pub” partners and their American, British and New Zealand online teen ambassadors.  Their promo video went viral and three weeks later they each left Budapest $20,000 richer.

No one (except their local “pub partners”) even knew they’d been there. There was no local bank account (all funds were paid with Bitcoin and Paypal) and much was bartered. There were no “employees” – apart from their Philippines-based “virtual assistant” who did fantastic work developing their website, setting up the payment arrangements and implementing the social media streams. No taxes were paid and (luckily!) no-one got hurt.

Those 3 weeks changed their lives. The global set of friends (direct and extended) they made has set them up for life. That year gave Josh a taste of the way that he wanted to live.

Upon his return home, he retained only a part of his originally secured degree, creating the portfolio degree that I described earlier.

He only lasted 6 months at home. Crowd-sourcing ideas and experiences from his new global network, he secured low paying (but high learning) jobs as an intern at Google, Uber, Kahn Academy, one VC-backed Silicon backed start-up and two NGO’s in India. He worked and studied in intense, frantic, 14 hour day bursts, punctuated by exciting but low cost six week holidays in Mexico, Romania and Bulgaria.

What Josh accumulated in that time was enormous “reputational” and “experiential” wealth but almost no physical assets and only modest cash savings.

Now, at 25, Josh is a pretty useful guy to an entrepreneur – capitalist or social. He’s a global CPA. He has little detailed knowledge of the tax or corporate law of any jurisdiction but he does know what he doesn’t know.

What he does very well is understand current technology and global context. He’s highly tuned in to what is happening now and what is likely to happen next. He has great analytical skills and an intuitive understanding of sales and marketing. He is a skilled communicator, which is much appreciated internally and externally by suppliers, investors and financiers.

He can assemble (and project manage) a highly qualified, high-performing, low cost virtual accounting team (and outsourcing partners) in 24 hours. He can report to the Board or he can be on the Board. And – if your business gets on a fast growth pathway – he can get growth funding: a globally sourced, well priced cocktail of equity and debt.

He’s got options. If the business is achieving rapid growth and a financial exit is in sight, Josh may well be there on sale day, having helped maximise the sale price for everyone’s advantage.

If an exit is not in sight, expect Josh to be off. It could be to a new high potential technology start-up, or it might just as likely be a social venture in Africa, or joining a team in Argentina to re-capitalise government debt.

There is no way you will know, because Josh probably won’t know either; it will just be another movement on his lattice.

¹ Note : At the time of writing I was a Chartered Accountant. As of June 2015 I am no longer a member of the Australian Institute of Chartered Accountants. It just didn’t seem relevant to me any more. I’m in a new phase of life. As a friend noted I’m now a PostCA and that feels about right!

My speech at the CEDA event re : Australia’s Future Workforce
Spare Capacity – Eliminate or Monetise