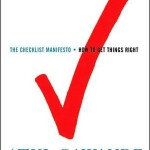 Gawande is a surgeon and a brilliant writer.
He’s a frequent contributor to the New York Times and his analysis on public health issues has been used by Presidents Clinton and Obama.

I have previously read and enjoyed his book “Better”.

Gawande has had a long standing interest  in improving performance.  He understands that Medicine is subject to many errors leading to injury and death to patients.

Even in Australia, preventable deaths arising from medical errors in Australia are in the order of 12,000 people per annum (I have seen quoted ranges from 8,000 to 18,000 !).  It is amazing that this does not receive more attention.

The inspiration for this book comes when Gawande is co-opted by the WHO to help develop a surgical checklist.  Whilst many surgeons and medical specialists are capable of being Prima Donnas and having a absurd notion of their self-importance – Gawande is refreshingly humble and honest.

Of course many of us are familiar with the idea of checklists and their potential benefits.  Anyone who has read the book The E-Myth will understand the concept and benefits.

The E-Myth suggested  extreme documentation of processes and use of checklists.

However what I enjoyed so much about this book is that Gawande steps us through the challenge, not just of the knowledge worker,  but of the extremely highly skilled professional and why checklists can be of great benefit  – but also why we tend to resist them.

Gawande explains the history of checklist from their development in the early days of aviation through to other uses such as on building sites, some areas of health, and even private equity investment decision-making.

He meets with the checklist guru at Boeing and guides us through the fine balancing game between too much detail [such that it becomes a turn off] and just enough detail to cover the major risks.  He also writes about the cultural barriers to adoption and how they may be overcome.  After reading this book I’m not only came away with the much greater conviction to introduce checklist into many aspects of my own work and my clients but I felt a deeper understanding of the nuances of getting it right.

Even at the end of the book after the journey of creating the surgical checklist, Gawande admits that he didn’t really think that he needed a checklist and that he only started using it because he felt he would be a hypocrite not to .

Then – in a breathtakingly honest reveal – he tells the story of how the checklist driven process saved one of his own patients after he made a mistake in surgery.

At least half a million deaths per year would be preventable with effective implementation of the WHO Surgical Safety Checklist worldwide. These results, obtained in the World Health Organization’s 2007-2008 pilot study of its Surgical Safety Checklist have now been confirmed by new studies: the use of checklists significantly reduces surgical morbidity and mortality.

Click on the links below to download the outcomes of the WHO work. We can learn from the way they have presented their work.