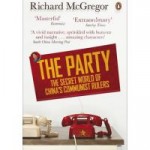 This is a brilliant, informative and entertaining book that deserves to be very well read. Richard McGregor, an Australian, has reported from North Asia for two decades and is a former China Bureau Chief for the Financial Times. He has delved deeply into the operations of China’s Communist Party and he reveals how this secretive cabal keeps control of every aspect of the country.
As another reviewer said,
“If you read only one book about China this year, it should be this one. And if you do not read this book, you probably do not understand China today.”

We all know how important China now is, particularly to Australia, but very few people understand how China works. I suppose one of my big takeaways from the book is to stop thinking “the Government of China” and to start thinking about China’s Communist Party as the holder of power. China has approximately 1.2 billion people but party membership is only 80 million at best (6%).

The key things that I learned are as follows.

The party structure then further cascades down to 31 provincial committees, 665 City committees, 2,487 county committees, 41,636 township committees and 780,000 village committees.
There are also 6 key departments, the most important of which is the Central Organization Department which is in charge of human resources – who gets (and keeps) what job.

Any reasonable sized business has its own Party Committee which feeds back information to the party and exerts influence within the company. [Often the CEO of the company will be also be Chairman of the company party committee.]

So – the party has a finger in every nook and cranny of the country.

“the Red Machine”
I did not realize that each of the heads of China’s 50 biggest companies have on their desk a red phone.

The “red machine” is like no ordinary phone. Each one has just a 4-digit number. It connects only to similar phones with 4-digit numbers within the same encrypted system.
For the Chairman and women of the top state companies, who have every modern communication device at their fingertips, the “red machine” is a sign they have arrived, not just at the top of the company, but in the senior ranks of the party and the government. The phone is the ultimate status symbol, as they are only given out to people in jobs with the rank of Vice Minister and above.

The “red machine” gives the party apparatus a hot line to multiple arms of the state, including the government-owned companies that China promotes around the world these days as independent commercial entities. One Vice Minister told me that more than half of the calls he received on his red machine were request for favors from senior party officials along the lines of; can you give my son, daughter, niece, nephew, cousin or good friend and so on a job? “

Party control over “independent” companies
The ability and desire of the party to control matters was neatly illustrated when BHP – Biliton launched their take-over bid for Rio-Tinto in 2007.
China saw the $127 Billion-dollar bid an un-ambiguous threat because of the way it would create a new monopoly in the sea borne iron ore trade in particular. The Politburo quickly decided to oppose the BHP-Biliton bid.
Chinalco, the aluminium company of China, a former Chinese state corporation launched a $14 Billion share raid in London to scoop up 9% of Rio-Tinto.
The CEO’s message to the public was consistent. Chinalco was a state-owned company, but run without interference from the state. But as McGregor describes this was an illusion. After the Poliburo had decided to intervene in BHP-Biliton’s bid the government effectively ran an internal tender to determine which Chinese “independent” company would intervene in the transaction. So effectively Chinalco was the winner of this bid and the finance was pre-approved from China Development Bank.
As the author describes, “the political heft behind the Rio-Tinto bid was evident from the way the financing was approved, directly by the State Council, or Cabinet, without the CDB’s board even discussing the loan.”

The author describes a number of other examples of major China companies, even with significant foreign share holdings where decisions regarding CEO appointments and removal are made by the party without reference to the independent board.

It’s very hard to tell who is the ultimate owner of companies and assets. Is it an individual, is it the party, is it some other arm of the state [the ownership of which is also murky] ? Many entrepreneurs like to have the involvement of the party for protection – they describe this as having a “red hat”.

Corruption on a grand scale

The corruption is on a mind-boggling scale, but because the party controls the media and information it is rarely exposed. Whilst there has been an increase in efforts to establish anti-corruption departments the control over which cases these departments work on is obviously a political decision and when the corruption is detected people are first answerable to the party before it gets to any court.

And I quote from the book,

“What is obvious for anyone who travels around the country is how much the economy is driven by another factor all together, a kind of Darwinian internal competition, that pits localities against each other much like the school of fish that makes up China inc. Each Chinese province, city, county and village furiously competes to gulp down any economic advantage they can lure their way.”
The particular role of local governments in promoting their own economies means that each locality operates in a way like a stand-alone company. Localities promote investment, strong – arm banks for finance and often hold shares in the business themselves. In other words, they operate much like a company might. At the same time, the local party’s overwhelming powers within its own borders effectively make each district its own separate jurisdiction, with direct control over the courts and local regulations governing business activities.
The author goes on to say, “The downside of the stellar growth rates that local dynamism has provided is the wasteful investment – lead growth economic model that it has spawned, a phenomonon that is now a matter of legitimate global concern. India has achieved growth rates of 7 to 8% by investing about one quarter of its gross domestic product. China, by contrast, as local governments spend willy-nilly to keep up the wangs and the zang s next door, has invested nearly half of GDP to get a few percentage points more growth than its giant neighbour.

You’ve no doubt seen photos of the Shanghai skyline. You might have even been there yourself. I’d certainly had the impression of this was the bastion of private enterprise but as the author reveals this is not so.
A quote from the book, “Shanghai was developed as a socialist showcase. Few visitors admiring the skyscrapers realized that most of them had been built by city government companies. Far from being the free-wheeling marketplace that many visitors believe, Shanghai represented the party’s ideal, a kind of Singapore-on-steroids, a combination of commercial prosperity and state control. The Shanghai mayor at the turn of the century, Soo Kuangdi expected Shanghai’s private sector to account for about 20% of economic output by 2010, up from a miniscule 1% in 1992. “

The author describes in great detail how the local politicians in Shanghai got ahead of themselves in regard to Beijing and the party and were eventually brought down in one of the most public corruption cases in China’s history. This internal competition and growth at all costs I suspect is masking a very significant bubble. There is an emerging view that much of this state development has been funded by off-balance sheet entities such as trusts and that China’s Government Debt to GDP ratio is dramatically higher than is publicly stated.

Summary
This is a very important book and the author has done a brilliant job of describing the systems and processes that the Communist Party uses to run the country.
The big question in my mind is what happens now?
They have done an amazing job of reinventing the party, learning from the mistakes of the Soviets and raising the living standards of many of their citizens.
But party members are less than 6% of the entire population, and whilst the extreme control has been a strength to date I question their ability to sustain it.
We have seen with the Arab Spring as social media tools became more widespread “and not even a Communist Party will be able to prevent this forever” itt is harder and harder to control the media.
Even in the past few weeks following a significant high speed train crash in China there have been rumblings in their media about government and party officials.
If as I suspect China is heading for some economic strife, even the popping of the public debt-funded bubble, you have to question how the party will survive.
Interestingly the author also talks at length about the Taiwanese experience and how Taiwan proceeded to a democracy with free elections and how the communist party was actually re-elected after a period of non-communist government.
So I suppose that anything is possible but I suspect that it will not be a smooth straight line to whatever happens next. I suspect that the changing demographics as a result of the one-child policy and the income-inequality [and corruption] will mean that the odds of a violent transition at some point would be reasonably high. I’m calling this book a must-read.