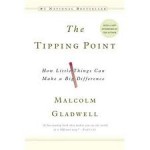 This is the book that brought Malcolm Gladwell to global prominence.  He is a brilliant observer and his unexpected insights are extremely powerful.  I first read this book several years ago and it really changed the way I look at many things.
I reread it in the last few months and just made me realized why I liked it in the first place.

The book examines how change happens quickly and as unexpectedly as it often does.
What makes something go “viral” ?

Gladwell explains that things cannot happen all at once and that little changes can make a huge difference.  It is about how social epidemics work.  Gladwell describes this book as an intellectual adventure story.  It draws insights from Psychology and Sociology and Epidemiology and uses as examples stories from many different fields.

Gladwell identifies three key factors that each play in role in determining whether a particular trend will “tip” into wide-scale popularity. Gladwell’s discussion and illustration of the concepts of the Law of the Few, the Stickiness Factor, and the Power of Context comprise the majority of the book.

In the “Law of the Few” Gladwell explains that word of mouth is something created by three very rare and special Psychological types here he calls Connectors, Mavens, and Salesmen.

Connectors are the “super networkers” who know people across different fields and create linkages of people and ideas.
You may have heard of the “Six degress of Kevin Bacon” an attempt to see how many degrees of separation an actor is from Kevin Bacon in terms of co-working on movies.
Well Gladwell explains that Rod Steiger is in fact the most connected actor – not only because of the number of movies he made but because he cut across a lot of genres. John Wayne made a lot of movies, but they were mainly Westerns, reducing his cross-genre connectivity.

Gladwell examines the “strength of weak ties”, explaining that acquaintances , not just close friends can be very important.
In the evening of April 18, 1775 Paul Revere set out on a 2 hour, 13 mile horse ride to warn nearby communities that “The British are coming” so that they could organise and prepare the local militia. The rest is history – the British were defeated.
Paul Revere set off an epidemic – his message went viral. But what I didn’t know (nor you I suspect) is that Revere had a communication partner, a fellow called William Dawes who undertook the same task of spreading the message on horse-back in the opposite direction. However his efforts had little effect – the local militia were not energised.
Why not ? It seems that Paul Revere was a Connector.He had a long history of political activism in the area and attended lots of meetings with various interest groups. There were 7 key political groups in Boston. Of 255 influential men, about 80% were members of just one group. No one was a member of all 7 groups. Only two men were a member of 5 groups : Paul Revere was one of the two. He was a “go-to-guy” for political information. He knew everybody.
So the difference between the rides of Paul Revere and William Dawes – Revere knew which doors to knock on.

It seems that for something to go “viral” the idea needs to get into the hands of one or more “connectors”. Often that idea comes from a “maven”.

Mavens are people who have a strong compulsion to help other consumers by helping them make informed decisions. They are the people that know all of the detail about a product or service. The extreme detail.

Salesmen are people whose unusual charisma allows them to be extremely persuasive in inducing others’ buying decisions and behaviors.

Gladwell identifies a number of examples of past trends and events that hinged on the influence and involvement of Connectors, Mavens, and Salesmen at key moments in their development.

As Gladwell says ” In a social epidemic Mavens are data banks. They provide the message. Connectors are social glue: they spread it. But the Salesmen have the skills to persuade us when we are unconvinced of what we are hearing.

So apart from being a very powerful book for business, it is also a great background to similar more interesting things that happen in life.  For more information see  The Tippint Point Wiki Summary .

I like everything that Gladwell has done but this book is a must read and makes it onto my all time top 10 must read business books.

The Fortune at the Bottom of the Pyramid : Eradicating Poverty through Profits
10 Travel Tips from my recent trip : What worked and what was a major pain in the butt.