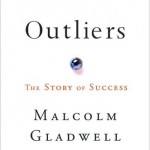 I’ll admit to be a huge fan of Malcolm Gladwell. He is just brilliant at spotting and describing things that nobody else seems to spot.  This book picks up on some of the themes of the Black Swan (by Taleb) in that Gladwell explains why most people’s understanding of success is wrong.

The reason that we get it wrong is that we only look at the fossil record of the successful and then presume that what works for them would work for everybody.

As an example let’s say that you studied successful small businessmen and asked them the secret of their success and 50% said I worked 80 hour weeks for ten years and that’s what you need to do to succeed.
This does not mean that the 80 hour weeks caused the success for there may be just as many (if not more) who worked the same hours and did not “succeed”.

(This is a valid criticism of the findings of the book Good to Great.)
Gladwell looks at the factors that built success and how knowing these factors can help society function better or allow you to improve your own understanding and judgement.

What is the secret of success?
People who succeed must work hard, but what if people work hard and do not succeed ?

We tend to presume that the super achievers must have some special extra capability.  We tend to overlook luck, being in the right place at the right time Hnd important aspects of an individual’s social and cultural background.

Gladwell looks at a number of examples.  One that sticks in my mind is the story of the Canadian Hockey League.  A very high proportion of the champions are born on the first few months of the year.  The underlying reason for this is that kids that stand out in their early teenage years tend to get selected in the best teams and picked for special attention such as National Training Programs,  Institutes of Sports etc.  Now because the junior leagues all have an age cut-off date of 1 January, the kids born earlier in the year they have very significant advantage in terms of physical and mental maturity over those born in the latter part of the year.

The difference at say the age of 14 of an extra ten or 11 months in physical and mental maturity can mean the difference between being prominent or fading into the background.  So the consequences of being born on the 31st of December versus 1 January, (potentially a difference of only minutes) can be very dramatic in shaping the future of a young Canadian hockey player.  Now when you reflect on that scenario it applies to many sports and many other things (for example the school year).
The solution, alternative, or multiple cut-off dates or other grouping criteria could be used.

Gladwell also explains that the people who become really good at something usually put in about ten thousand hours of practice.  It seems that the ten thousand hour marker carries over to other fields such as the arts and even technical training or computer programming.

The next criteria that Gladwell looks at is how access to the right resources or experiences at the appropriate time in someones learning and development can be critical.

Gladwell explains [something that I did not know] that Bill Gates was fortunate enough to attend a Seattle private school in the 1960’s that had a computer club , and he could also “steal” time on the computers of a nearby University.  There were very few schools in the country at that time that offered this scenario.  So whilst no doubt Gates had the intelligence and the aptitude,  his environment enabled him to turbo charge his learning such that he was able to get his ten thousand hours of computer experience at a much earlier age  than a kid who had gone to a school without the same computer access.

The next interesting thing about Gates’ success is that his timing was right.  He got in on the ground floor, he left school at about exactly the right time to have a few year or two under his belt before the time was right to start Microsoft.

If that sounds a bit too simplistic, the notion that Gates was in the position to catch a wave that turn into a tsunami. Consider this. Gates was born in 1955, Bill Joy [who rewrote UNIX and JAVA] was born in 1954, Paul Allen [co-founder of Microsoft] was born in 1953, Steve Ballmer (Microsoft CEO after Gates) in 1956 and Steve Jobs in 1955.  They shaped their field because they entered it at the right time; early enough to have a major impact, but late enough to get practice time on computers after the early days of punch cards.

Gladwell points out that this historical positioning is rarely conscious, does not necessarily seem like a good thing at the time and often only makes sense only in retrospect.

Another story that I really liked was the story of Harvard Law graduate Joseph Flom.  He graduated law in 1948 and unlike most of his classmates he could not get a job.  He was “ungainly awkward, a fat kid” and also he happened to be Jewish at a time when the New York “blue blood” firms were dominated by high flying WASPS who all new one another.
So because they could not get jobs Flom and his 2 partners started their own firm and got whatever work they could.  Some of that work was stuff that the blue blood establishment firms did not want to touch.  The blue blood firms did not believe in hostile corporate takeovers.  Their sort did takeovers over dinner, or at the club.  And so Flom and his mates started to get the work such as ugly proxy battles in takeovers.  Their firm accumulated a great deal of experience in an area that was shunned by the traditional firms.

Guess what, the market changed and hostile takeovers became common.  By then Flom was already an expert with far more experience in the field than his competitors.  Demand for his legal services boomed and he prospered.

Genius is not enough.

Gladwell tells the story of Christopher Langan who won $250,000 on a quiz show called 1 versus 100.  His IQ was said to be “too high to be accurately measured”.  By any measure he had been a child genius.  Nevertheless he had achieved little success until he won the quiz show – because pure intellectual genius alone is not enough.

In Gladwell’s opinion you also need “practical intelligence”, and Langan because of his difficult upbringing had none of that.  He was a social misfit and his limited family financial resources caused him problems in getting to his University classes.  He did a series of menial jobs – and had never really used his intelligence professionally.
Gladwell contrasts the experience of Langan with Robert Oppenheimer (scientific Director of The Manhattan Project – atomic bomb) who was had similar natural gifts but the additional advantage of a wealthy family and very significant  education and emotional support from his family.  In addition to his genius he had practical intelligence and significant social skills.

The Social Roots of Conflict and Math Ability

Now this is where it gets really interesting !

You really need to read the book to appreciate this fully but in a nutshell Gladwell steps through some scenarios that suggest our cultural and social heritage has a much more significant effect than you would presume.

An interesting example is Asian superiority in math.  Asians have linguistic advantages in regards to numbers.  The Chinese words for numbers are shorter than the English words and their counting system is more logical too

Rather than using new words or numbers greater than ten, (Japan, Korean and Chinese ) systems make combinations; “11 is 10-1.  12 is 10-2.”  Therefore adding and subtracting are almost automatic:  say the words and you add them.  Gladwell poses that some Asian mathematical superior comes from their agricultural system, especially rice growing.  Most Europeans had seasonal cropping systems with extended idle periods.  Rice farming took a great deal of extremely hard work.  Asian farmers had to prepare rice paddies with an established, constantly monitored water flow.  This required sophisticated leveling of the fields, and irrigation systems and management.   Rice crops were timed to achieve two annual crops in the same fields.  Farmers could choose from a much larger array of seeds (than Europeans) , switching strains of rice from one planting to another.  This produced the deeply ingrained cultural tendency towards working very long hours while maintaining focussed attention on multiple factors; exactly what you need to master math.

Impact of social norms on critical team work
Ever wonder why a successful business in one country struggles when it tries to do business in  another country?  Maybe it has to do with a lack of understanding of subtle but important ways that the cultures differ.

Gladwell draws on some studies of the black boxes of crashed airliners.  These studies reveal the critical interaction between pilot and co-pilot leading up to the crashes.  The “typical accident” involves 7 consecutive human errors; stemming not from lack of flying skill, from stress, poor communication and the crew’s social background.

National cultures differ in several relevant traits.  The more a “culture values and respects authority”, the less likely its members are to challenge their superiors or to tell them unpleasant information e.g. “we are about to crash because we are about to run of fuel”.  No kidding.  One can not imagine an Australian co-pilot being so subordinate to his captain that he would be uncomfortable telling him that the plane was about to run out of fuel, but that is exactly what happened in the case of a Korean Air accident.  This realisation actually led to very significant changes in training techniques for pilots to ensure that these cultural background issues did not get in the way of those important little conversations like “we are about to crash because we are running out of fuel ! “.

So this a sweeping work and is skillfully and  entertainingly told by Gladwell.